Matthias Koch has studied modern social and economic history as well as Japanese studies (Japanology) at Philipps University of Marburg and took his M.A. degree “with honors”. After graduation he did research for two years at The University of Tokyo (Tōkyō Daigaku) on Japanese industrial, business, and company history of the 20th century and deepened his Japanese language skills. His M.A. thesis and his doctoral dissertation were published as books under the following title: “Japan’s Nuclear Energy Policy in Historical Perspective” (1992) and “Conversion from Military to Civil Production in Japan after the Second World War: From a War Economy to a Global Economic Power” (1998).

Matthias Koch holds many years of experience in Japan-related fields of information and documentation as well as research and teaching. He worked as a scientist, a senior researcher, a lecturer, a Japanese teacher and twice as a guest professor among others in Marburg (1993–1997), Tokyo (1998–2008), Düsseldorf (2001–2002), Hamburg (2008–2009), and Berlin (2009–2010). He started to work independently as a consultant, a coach, a translator and an interpreter as well as an information broker and cultural mediator. His practice-oriented program as a “bridge-builder between Germany and Japan” serving diverse needs in economy, policy, science and society is built on a sound scientific foundation and functions as idea, vision, and strategy at the same time and is continually being developed further.

Matthias Koch studied and worked for more than 12 years in Japan and acquired excellent Japanese language skills and a high level of intercultural competency. He has published ten books and two databases among others. Strong assets are strategic and efficient research and analyses of data and information in its original language. A passion for crossing frontiers interdisciplinary, especially with regard to topics and problems concerning technology, science, economy, policy, and society makes him a highly specialized generalist sui generis.

Matthias Koch envisions himself not only an analyst and information service provider for market monitoring, industry analysis and business support as well as a provider of Japanese translating and interpreting services and a cultural mediator but is also watching and thinking outside the German and the Japanese box throughout and beyond East Asia. Additionally, related to specific projects Matthias Koch is cooperating within a world-wide network together with other specialists and generalists. 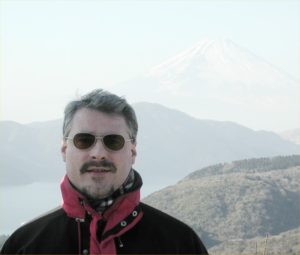 Matthias Koch privately, Mount Fuji can be seen in the background